In the framework of the Spring Meeting 2019, on the morning of March 22, 2019, in Lang Son City, Lang Son Province, the Spring Talks 2019 took place between the Secretaries of the Party Committees of provinces including Lang Son, Quang Ninh Cao Bang, Ha Giang (Vietnam) and  the Secretary of the Party Committee of the Guangxi Zhuang Autonomous Region (China). Attending the Program were Deputy Minister of Foreign Affairs Le Hoai Trung; Deputy Head of Central Commission of Foreign Relations Nguyen Tuan Phong, Ambassador Extraordinary and Plenipotentiary of the People's Republic of to Vietnam Xiong Bo; Vietnamese Consul General in () Hoang Ngoc Vinh, with high-ranking delegations and leaders of 5 provinces / region. 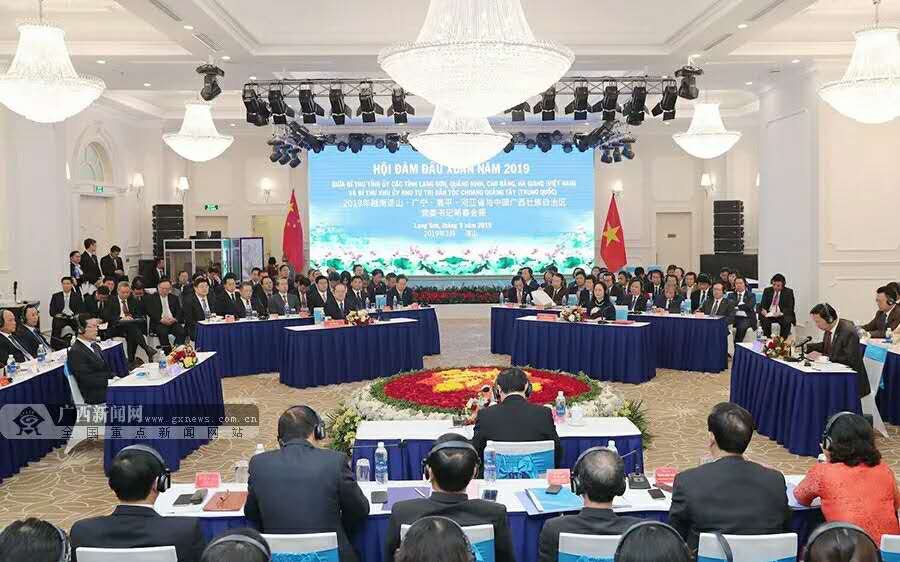 Overview of the Spring Talks 2019

The Spring Talks 2019 took place between the secretaries of the Party Committees of provinces including Lang Son, Quang Ninh Cao Bang, Ha Giang (Vietnam) and the Secretary of the Party Committee of the Guangxi Zhuang Autonomous Region (China) was a practical, effective local-level program of cooperation, exchange and friendship, highly appreciated by the Party, State, Government and central-level agencies of the two countries Vietnam and China. At the Talks, the parties reviewed and highly appreciated the achievement of common awareness gained at the Spring Talks 2018, and together exchanged, discussed and agreed on the contents that need concentrated leadership and direction to further strengthen the friendly relations and comprehensive cooperation in many fields between Lang Son, Quang Ninh, Cao Bang, Ha Giang (Vietnam) and Guangxi (China) in the coming time. 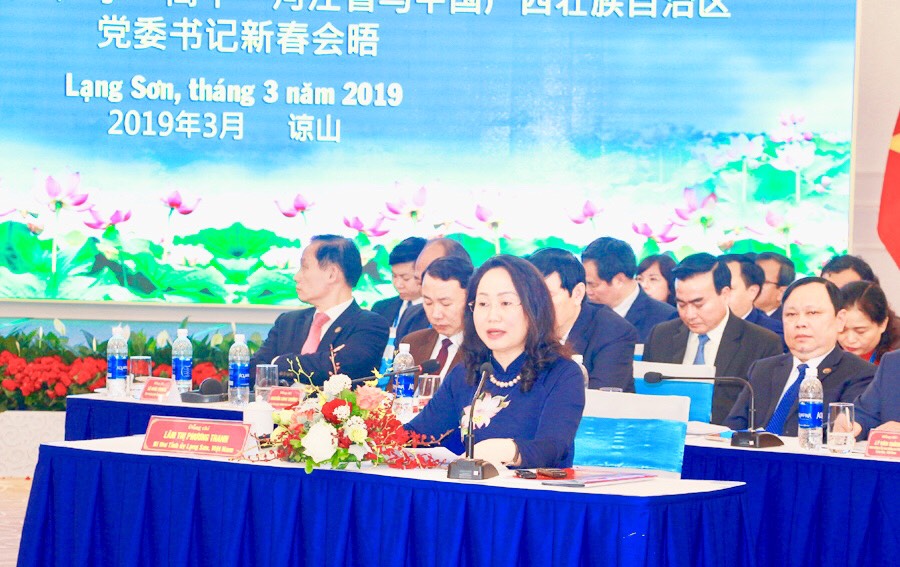 Mrs. Lam Thi Phuong Thanh, Member of Central Party Committee, the Secretary of the Lang Son Party Committee – the province hosting the Spring Meeting 2019 between the Secretaries of the Party Committees of provinces: Lang Son, Quang Ninh, Cao Bang, Ha Giang (Vietnam) and the Guangxi Zhuang Autonomous Region (China) affirmed that in the past years, the Vietnam and China traditional friendship has been continuously strengthened and strongly developed. The leaders of the two Parties and the two States maintain meetings, contacts and mutual visits, opening up many opportunities and favorable conditions for the border provinces - region to promote friendly exchanges and cooperation in many fields, bringing practical benefits to border people. Along with the development of the two countries’ relations, the friendly cooperative relations between the provinces of Lang Son, Quang Ninh, Cao Bang, Ha Giang () and Guangxi () continue to gain many important results in local-level cooperation between the two countries. Especially since the Spring Meeting 2018 was held in Guilin City, Guangxi (China), up to now, delegation exchange activities between different levels, sectors, districts/counties and people between five provinces - region continue to be strengthened and promoted, cooperative relations in many fields are actively implemented, becoming more substantive, bringing about practical effects and benefits for border people, building Vietnam and China’s border line of stability, peace, friendship, cooperation and development, positively contributing  to the implementation of "the Vietnam - China comprehensive strategic cooperative partnership". The organization of the Spring Meeting 2019 is an opportunity for five provinces/region to review a past stage together, to find solutions to build an increasingly strong, practical and effective cooperative relationship between the provinces - region, contributing to consolidating the friendship traditions between the two Parties, two States of Vietnam – .

In order to continue to thoroughly grasp the common perceptions gained between the leaders of the two Parties, two States of Vietnam – China, the agreements have been reached between the five provinces - region, on behalf of the four Vietnamese provinces, the Secretary of the Lang Son Party Committee synthesized and evaluated the achieved results in 2018, proposed some contents to promote cooperation in the future. At the Meeting, five provinces/region agreed to appreciate the results of implementing the 2018 Meeting Minutes, at the same time exchanging, discussing and proposing measures to further promote the role of the Spring Meeting 2019 between the Secretaries of the Party Committees of provinces: Lang Son, Quang Ninh, Cao Bang, Ha Giang (Vietnam) and the Secretary of the Party Committee of the Guangxi Zhuang Autonomous Region (China). At the Talks, the two sides gained many important common perceptions as the following: (1) Continuing to strengthen cooperation and friendship exchange; (2) Deeply promoting practical cooperation on key areas; (3) Enhancing cooperation between the Party committees and their related units; (4) Strengthening people's exchange and foreign affairs to strengthen the friendship foundation; (5) Strengthening border management cooperation, together building a friendly peaceful border and agreeing on continuing to propose competent authorities to allow the organization of the Spring Meeting in 2020 in Guangxi, China, specific contents and time shall be agreed upon by the parties and notified to each other through diplomatic channels. 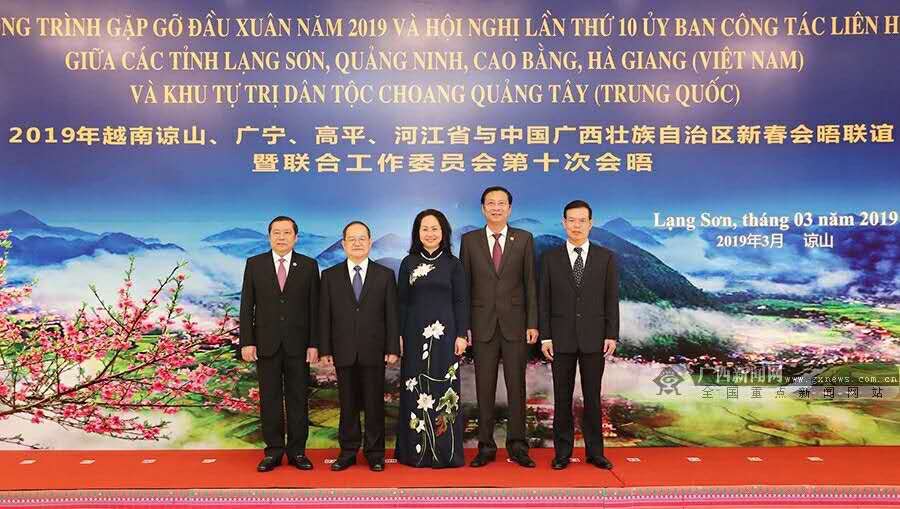 The secretaries of the Party Committees of provinces and region took a souvenir picture. 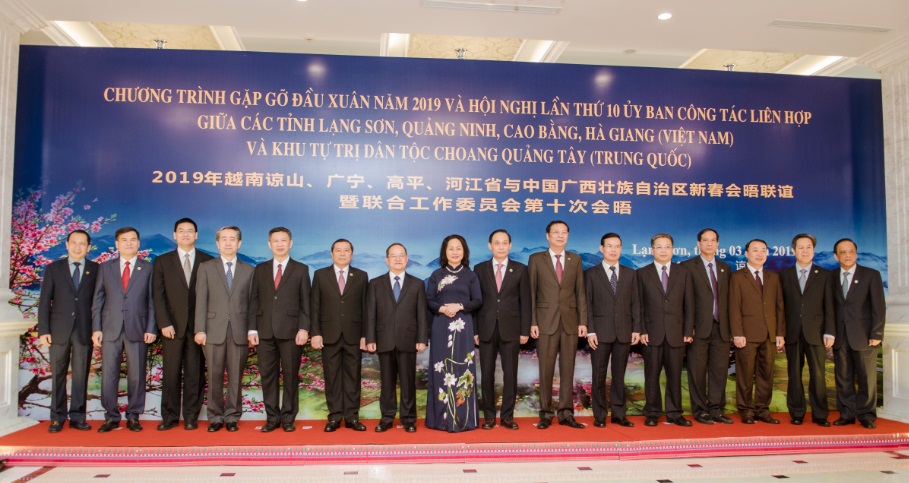 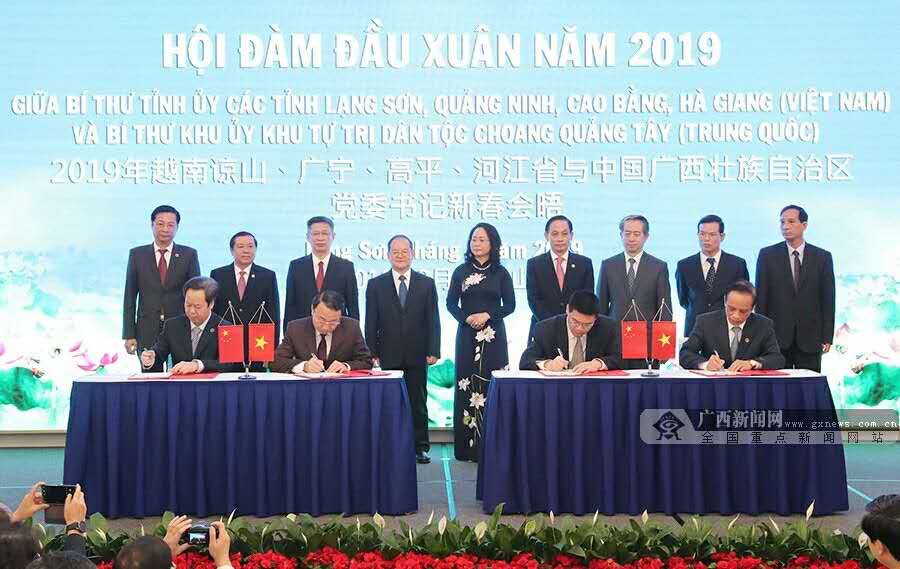 At the end of the Talks, the Secretaries of the provinces/region of the two sides signed the 2019 Meeting Minutes and witnessed the signing ceremony of seven cooperation agreements between sectors and localities of five provinces and region, in which Lang Son signed two cooperation agreements: Memorandum of understanding to establish a mechanism for meeting and exchanging periodically between Lang Son Provincial People's Committee and Chongzuo Party Committee; The mechanism of periodic talks between the of Dong Dang - Lang Son border-gate economic zone Management Board and the Management Board of Pingxiang general tax-suspension area.

Announcement Ceremony of the Prime Minister's decision recognizing Lang Son city as a second-grade city of Lang Son province
- May 07, 2019

The delegation of the Australian Embassy paid a working visit to Lang Son province
- Apr 18, 2019 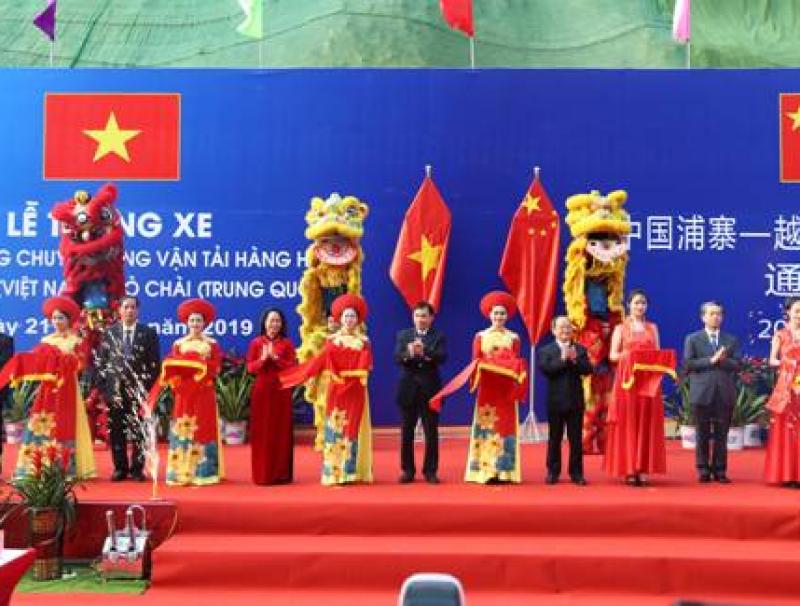 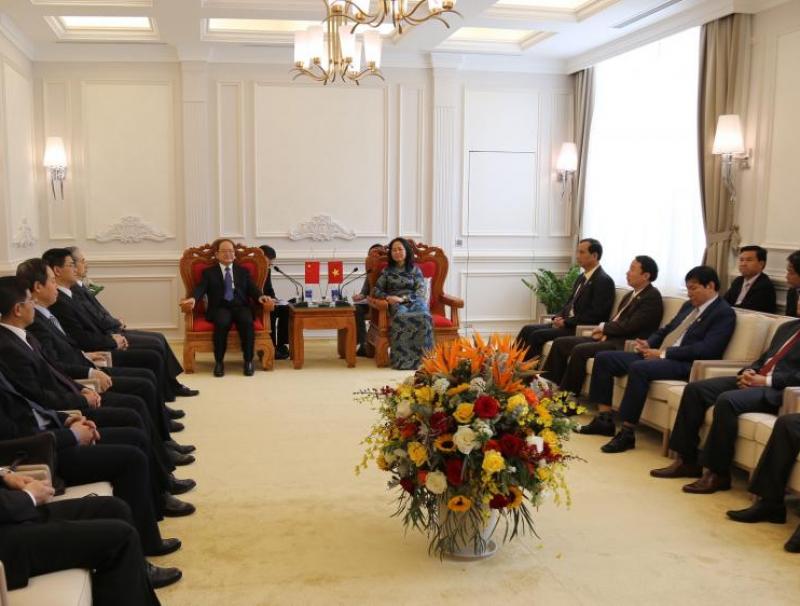 In the morning of M